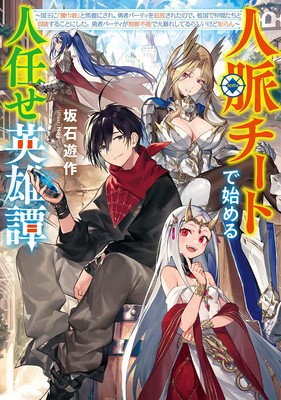 The February issue of Kadokawa‘s Dengeki Daioh monthly comic magazine revealed on December 25 that Yusaku Sakaishi‘s Jinmyaku Cheat of Hajimeru Hitomakase Eiyūtan (A heroic legend where everyone does the job and starts off with a cheat on social relationships) the light novels inspire a manga adaptation that will launch in the magazine’s next issue on January 27. Tagi Motowashi draws the manga.

The story of the novels centers on Net, a young man whose true competence lies in his broad personal connections, which have allowed him to achieve great feats behind the scenes. One day, his own king loses patience with him and banishes him from the feast of legendary heroes. Now he has to start over as an Adventurer, but he plans to make full use of his connections to powerful Chivalrous Orders and other races. Meanwhile, the King finds the Hero’s Day to be full of self-centered individuals, with the loss of Net weakening their bond with one another.

Sakaishi spear the story on the Shōsetsuka ni Narō website in November 2020 and ended it in December of the same year. Kadokawa publishes the story in print with illustrations by Noy, starting with the first volume in July 2021. The second volume was dispatched in November 2021.

J-Roman Club publishes Sakaishi’s The dark road of the sacred knight light novels, and released the third novel in September 2020.