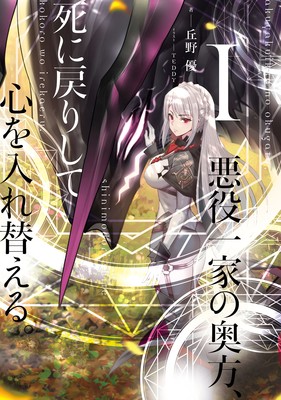 The February issue of Kadokawa‘s As Comp magazine announced on December 24 that Kagami was releasing a manga adaptation of Yū Okano‘s Akuyaku Ikka no Okugata, Shinimodori Shite Kokoro or Irekaeru (The Matriarch of a Wicked Family Changed Her Mind After Returning from Death) series of novels in the next issue on January 26.

The story begins when Elain, the Duchess of a family so treacherous that they even plotted to claim the throne, dies at the hands of her own daughter. She finds herself regretting her own wickedness only on the verge of death and realizes far too late the ruin she has brought to her last name. However, she is surprised to regain consciousness – in the middle of childbirth. She soon realizes that she has been taken back in time for 30 years to when she had her first son. Carrying her regrets and determined not to die a vile death of her daughter, she strives to change her habits and improve her life through her knowledge of the future.

Okano spear the story on the Shōsetsuka ni Narō website in July 2020. Kadokawa began publishing the story in print with illustrations from TEDDY, starting with the first volume (seen at right) in August 2021.